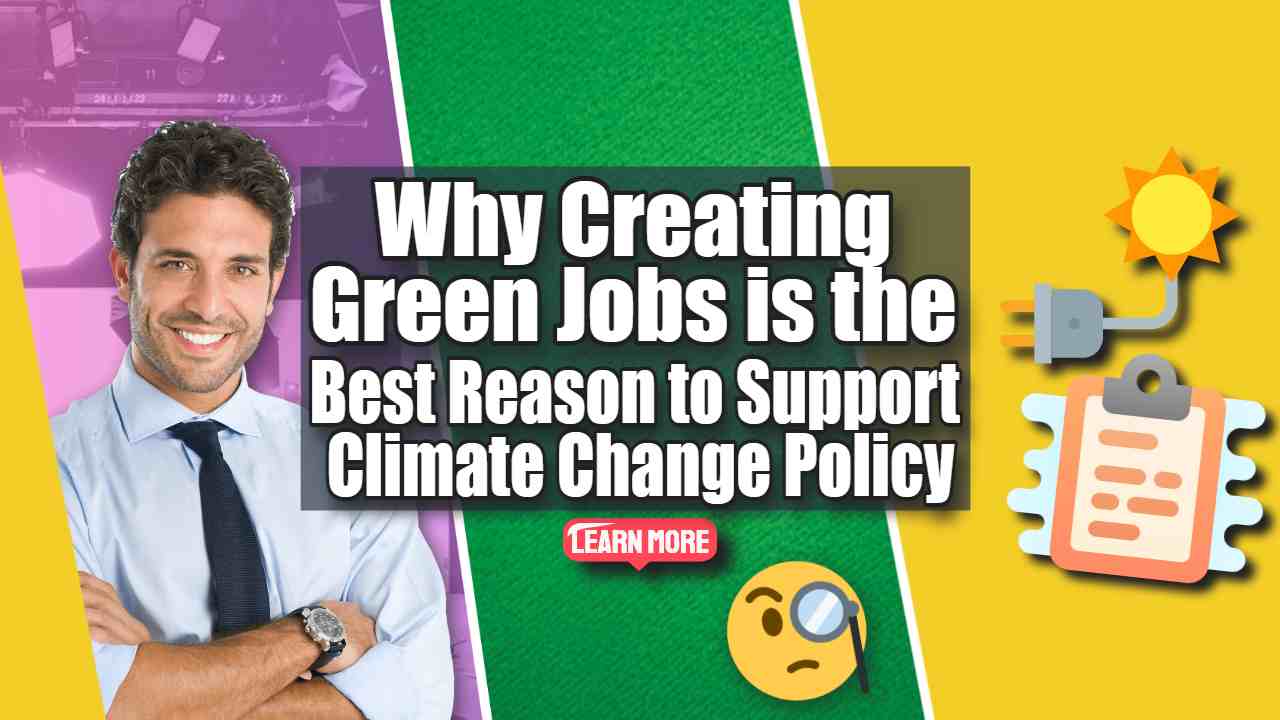 Of all the facts emerging about Green Energy, the most surprising is that creating green jobs looks like being the best reason to support climate change policy. This remarkable point has been identified in a Forbes article by the climate policy think tank “Energy Innovation”.  Meanwhile, solar has become cheaper than coal, and the best producing solar is providing electricity at the lowest cost ever.

There is no doubt that renewable energy jobs are positively booming across the US. Better still they are creating stable high-wage employment for blue-collar workers. This can only be good news after so many years when this sector has been the worst hit by high unemployment and job losses.

Renewable energy sources have to be developed fast to avoid the worst consequences of climate change. They do not at-source emit greenhouse gases, which is the number one enemy in all global warming. There is no choice, renewables it has to be.

But, somehow, while promoting climate change policy for its environmental benefits our policymakers seem to have missed the point that as the green energy sector grows, it’s creating a lot more jobs.

The fact is, according to “Energy Innovation”, it is creating between 3 and 5 times more jobs than in equivalent non-renewable sectors.

What is the Renewable Energy Sector?

No scientists contest the fact that these sources are all constantly replenishing themselves!

Renewable energy, “alternative energy” or “clean energy”, comes from natural sources or processes that we cannot run out of.

Whereas coal and other non-renewable sources get more expensive all the time as the easy to mine coalfields, and oil reserves get used up and extraction systems have to move on. Renewable energy plants can stay where they are forever. All that is needed is maintenance from skilled staff to replace worn out parts.

This has an enormous benefit in lowering the costs of renewable energy over non-renewable resources.

But, quite apart from that, the technology used in renewable energy creation has been moving forward at an astonishing and accelerating pace. Let’s just take a look at progress in the US alone (and the US is far from being one of the best-performing nations in renewables globally):

The Current State of the Renewable Energy Industry in the US

Currently, there are more than 67,000 wind power turbines in operation in the US and another 200 major projects each with 50 or more turbines are in planning. All these wind farms will contribute to the creation of more than 600,000 direct and indirect jobs by 2050. The cost of wind energy has been steadily falling for many years. It has been claimed that the wind energy sector will soon employ more people than all oil, gas and nuclear power plants put together!

There are now in excess of 2,500 large utility-scale solar photo-voltaic (P.V.) electricity-generating solar power plants in operation and more than ever before are in planning. This industry has already created more than 260,000 direct and indirect jobs and is the clean energy equivalent of adding many coal power plants to our grid. (“Utility-scale” means over one megawatt (MW) of total electricity generating capacity.)

There are now 50,000 geothermal heat pumps installed in the United States each year and this number is rising rapidly. There are no national figures for employment in heat pump installation and maintenance and it is a part of the US HVAC industry. According to the Statista website the HVAC industry currently employs more than 500,000 people directly and the industry is already growing at close to 6% each year.

There are now 11,000 solar installers in the United States. This industry creates jobs for those employed in sales, systems design, installation, training, marketing and permitting. As the sector grows, so will the jobs. There are already 2 million properties that have solar power installed, and over 1,500 solar power companies operating now in California.

U.S. Solar Farms. There are now 24 solar farms in operation and another 9 are in planning. This sector employs more than 10,000 people directly and will continue to do so well into the future.

This is not an exhaustive list of the renewable energy sectors. But it does point to an obvious truth.

The Green Economy can create a lot of jobs. It creates “clean energy” jobs and it’s doing it quicker than other sectors.

It is creating green jobs in the generation industry that pulls energy from the wind and sun.

It is creating jobs for the IT workers who develop the grid control systems to distribute the power across the nation.

All energy sectors create jobs that are locally based. A large proportion of the jobs serve local energy supply needs and physically have to be serviced locally through human contact.

A high proportion of the new jobs are jobs that cannot be off-shored. They are not jobs that can be handled by staff in China, India or anywhere but locally. They require a physical human presence to operate, monitor and run the highly geographically distributed energy creation and distribution infrastructure which renewable energy production demands.

All sectors need to create more jobs if we are going to make the transition to 100% renewable energy by 2030. It’s the only way to make our planet a better place.

If you don’t think that you, your company, or your organization will be doing more to create jobs as you move your operations forward into being sustainable, think again. And, to participate in the new “circular economy” for materials, think again.

You would be unique in that and you may need to review your business plan.

The Green Economy is a huge opportunity for business owners and employees. That’s because there is every prospect that renewable energy will be the cheapest energy in 30 years time, that the world has ever known. And, the early-adopting nations will be the biggest benefactors.

As long ago as autumn 2020, the International Energy Agency released its latest World Energy Outlook for 2020 in which the IEA officially states that solar from the latest solar generating techniques is the cheapest electricity in history. Solar power has already become cheaper than coal and gas and that goes for most major countries.

We think that wind and a number of the other main renewables will follow this lead in the years to come. This leads us to say:

“Create green jobs not only brings a huge benefit for everyone who works in the green sector. But as a result energy costs will be lower than ever before. Historically low energy costs will raise living standards and job creation still further. “Creating Green Jobs” truly will the benefit of the whole economy.”

In fact, it is so huge that it will become a no brainer to go green. Look at it this way:

“If we don’t build jobs in the green sector, if we don’t create green jobs, we will never have the clean energy economy that we need. We will stay in the fossil economy and we will crash and burn.”

BUT, now consider the flip side of this:

“If we build green jobs, we adopt sustainable practices. We create new streams of revenue through the new circular economy. The collossal burden of our current wastefulness is reduced. Energy costs fall. These grow our bottom line, and bring in new customers that buy our products and services. A virtuous circle is built. We will have a stronger economy and a stronger foundation for a green energy system. It becomes the vehicle that can deliver the clean energy transition that we need.”

We all have a stake in the success of the industry. We need a plan, and we suggest the following:

A Plan to Create Jobs in the Green Sector

1. Create wind energy jobs by building the wind industry. Government policies can be set up with investment assistance to just create wind jobs all day long, every day. The technology is available to build wind turbines out at sea. There are no restrictions on land availability for off-shore wind farms. Most of the world’s great cities are near water and can therefore be wind-energy supplied from off-shore.

4. Create bio-energy jobs, especially by encouraging biogas production which by upgrading will produce biomethane. Use biomethane as the best “market-ready technology” to power vehicle transport until hydrogen-powered vehicles are readily available. (Discourage use of batteries in all HGV use, and encourage the development of batteries that are environmentally sustainable.)

5. Create jobs in a new hydrogen energy sector, using hydrogen for vehicle propulsion and as a renewable energy replacement for natural gas.

Do this, and let China keep burning coal. Make America great again, based upon moving fastest to cheaper renewable energy!

The key to achieving the least suffering from climate change is to create renewable energy jobs in the green sector.

Our politicians globally have been promising to implement Net Zero Carbon targets to achieve a point at which society ceases to discharge carbon dioxide. Global weather systems will then start to stabilize at a new higher average temperature.

Encouraging renewable energy production with its huge job creation potential will be essential.

It All Starts and Ends with Creating Jobs

That’s what I’ve been talking about in this article. I’m going to keep talking about this because this is the real job creation issue that we need to create as a country and not jobs by making stuff for personal use.

Yes, there will be jobs in the manufacturing industry. Yes, there are jobs galore to come from this in the distribution and storage industry. There are numerous other green job categories. I’m sure you can come up with many more. All you have to do is think of it:

Creating green industries with really bold policies will create millions of jobs and increase the economy for years to come. Just think about it:

The whole idea behind the green industries is that you will create a whole new generation of consumers. You will increase the country’s economy through reduced energy costs, and the sale of renewable technology to other nations.

The Article Why Creating Green Jobs is the Best Reason to Support Climate Change Policy was found on https://limitsofstrategy.com