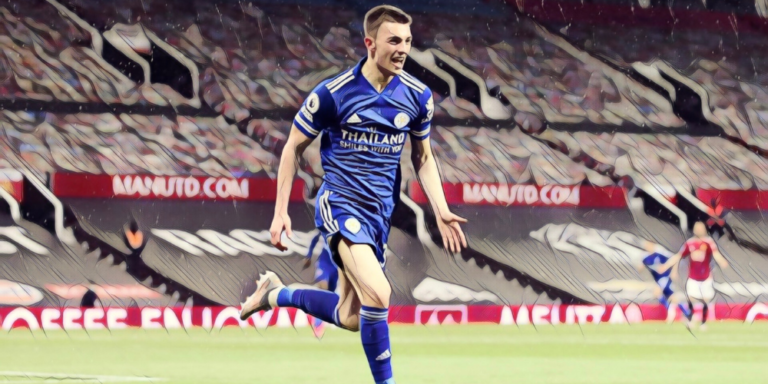 Luke Thomas’ brilliant goal for Leicester helped the Foxes to a 2-1 win at Manchester United this week, the left-back’s fine finish helping secure his side what could prove to be a vital three points in the race for Champions League football.

Thomas’ goal also saw the teenager join an exclusive list of Premier League youngsters, becoming just the 10th teenage talent in the division’s history to net an away goal at Old Trafford.

Following the defender’s goal, we’ve looked back at the 10 teenagers to score away goals at Manchester United in the Premier League.

Nick Barmby became the first teenager to score an away Premier League goal at Old Trafford, scoring for Tottenham in a 4-1 defeat at Manchester United in the league’s inaugural campaign.

The north London side proved little match for the Red Devils who were in the midst of a first title-winning campaign in 26 years, goals from Eric Cantona, Denis Irwin, Brian McClair and Paul Parker putting the home side four goals ahead inside the opening hour.

Barmby’s goal came two minutes from time as the youngster headed in, though it was little consolation for a Spurs side well beaten.

The following season and it was another Spurs talent who netted as a teenager at Manchester United, Darren Caskey scoring in a 2-1 defeat for Ossie Ardiles’ side.

United headed into the October 1993 clash as defending champions and looked on their way to three points after goals from summer signing Roy Keane and Lee Sharpe put the home side in control.

Caskey’s goal reduced the arrears just three minutes after Sharpe’s goal to set up a nervy finish, but the Red Devils held on to secure all three points against Spurs for a second successive season.

Michael Owen’s rapid rise remains one of the most exciting teenage emergences of the Premier League era, the forward bursting onto the scene with Liverpool to become one of the division’s brightest talents.

Owen was in the midst of a first full season that saw the 18-year-old win the Premier League’s Golden Boot, finishing the campaign with 18 league goals including an equaliser in a 1-1 draw at Manchester United.

The lightning pace that defined Owen’s early game was evident as he burst beyond a hesitant Gary Pallister, lifting the ball over Peter Schmeichel to secure Liverpool a point at Old Trafford.

Nicolas Anelka was another forward who lit up the Premier League whilst still a precociously talented teenager, arriving from PSG as a relative unknown before helping Arsenal to a domestic double during his debut campaign.

The following season saw the Frenchman explode with 17 league goals to be named as the PFA Young Player of the Year, including scoring in a 1-1 draw between the Gunners and title rivals Manchester United.

The two teams were locked together in a tight title race with this the first of four defining games in the season, Anelka opening the scoring with a high finish – after Dwight Yorke had earlier missed a penalty for United – before Andy Cole rescued a point for the hosts.

That equaliser proved pivotal as the Red Devils pipped Anelka and Arsenal to the title by a single point, whilst also eliminating the Gunners in the FA Cup semi-finals on their way to a historic treble.

Francis Jeffers emerged from the Everton ranks in the late nineties amid much excitement, the penalty-box poacher making his debut as a 16-year-old before growing into the side.

Jeffers scored six league goals in each of his three seasons as a regular, including a close-range effort to open the scoring at Manchester United during the 1999/2000 season.

Everton’s performance – much like Jeffers’ later career – fizzled out soon after however, the Toffees on the receiving end of a 5-1 thrashing as an Ole Gunnar Solskjaer brace inspired a comeback win for the Premier League champions.

Bolton returned to the Premier League after a three-season absence in 2001/02 and started impressively with three consecutive wins, though their finest result of the campaign came with a shock win at defending champions Manchester United.

Defeat for Sir Alex Ferguson’s side was one of six in the league at Old Trafford that season, their worst record since the 1977/78 campaign.

West Ham also won at Manchester United during the 2001/02 season, Jermain Defoe scoring the only goal of the game for Glenn Roeder’s side.

Defoe came through the academy ranks with the Hammers and finished as their leading scorer as a teenager during that campaign, netting 14 times across all competitions.

Kelechi Iheanacho emerged as an exciting talent at Manchester City and proved the difference in Pep Guardiola’s first-ever Manchester derby, scoring one and providing another in a 2-1 victory at Old Trafford.

The Nigerian showed huge promise during his initial performances at the Etihad before leaving for Leicester in search of regular first-team football, though has found opportunities limited given the presence of Jamie Vardy.

The now 24-year-old has enjoyed the best period of his career in recent months however and is Leicester’s leading scorer this season with 18 goals in all competitions.

Matty Longstaff announced himself to Newcastle supporters with the winning goal against Manchester United on his Premier League debut, a sweet strike from outside of the box to secure a 1-0 win at St James’ Park.

The home-grown midfielder then repeated the trick by netting in the reverse fixture at Old Trafford, though his opening goal was not enough for the Magpies as the home side fought back to secure a comfortable 4-1 win.

Luke Thomas’ brilliant finish set Leicester on their way to a crucial win at Old Trafford in midweek, the left-back arriving at the back post to thump home a volley and open the scoring.

The goal helped Brendan Rodgers’ side to three points which could yet prove crucial to their Champions League hopes with the Foxes in the top four with just two games of the season remaining.

Thomas has made 10 league starts this season and has seen his opportunities increase since the sale of Ben Chilwell to Chelsea last summer, the 19-year-old part of an exciting collection of young talent at the King Power Stadium.

The post Appreciating the 10 teenagers to score away goals at Old Trafford in the Premier League first appeared on The Football Faithful.

The Article Appreciating the 10 teenagers to score away goals at Old Trafford in the Premier League First Appeared ON
: https://arsenalweb.co.uk

The Article Appreciating the 10 teenagers to score away goals at Old Trafford in the Premier League First Appeared ON
: https://gqcentral.co.uk